On your first day in Hawaii, your tummy will probably look good in your bikini due to stepping up your gym routine right before the trip. On your last day in Hawaii, this may not be the case because you've probably been stuffing yourself silly with fish and shaved ice. Some of the best things we ate on our island adventures are below: 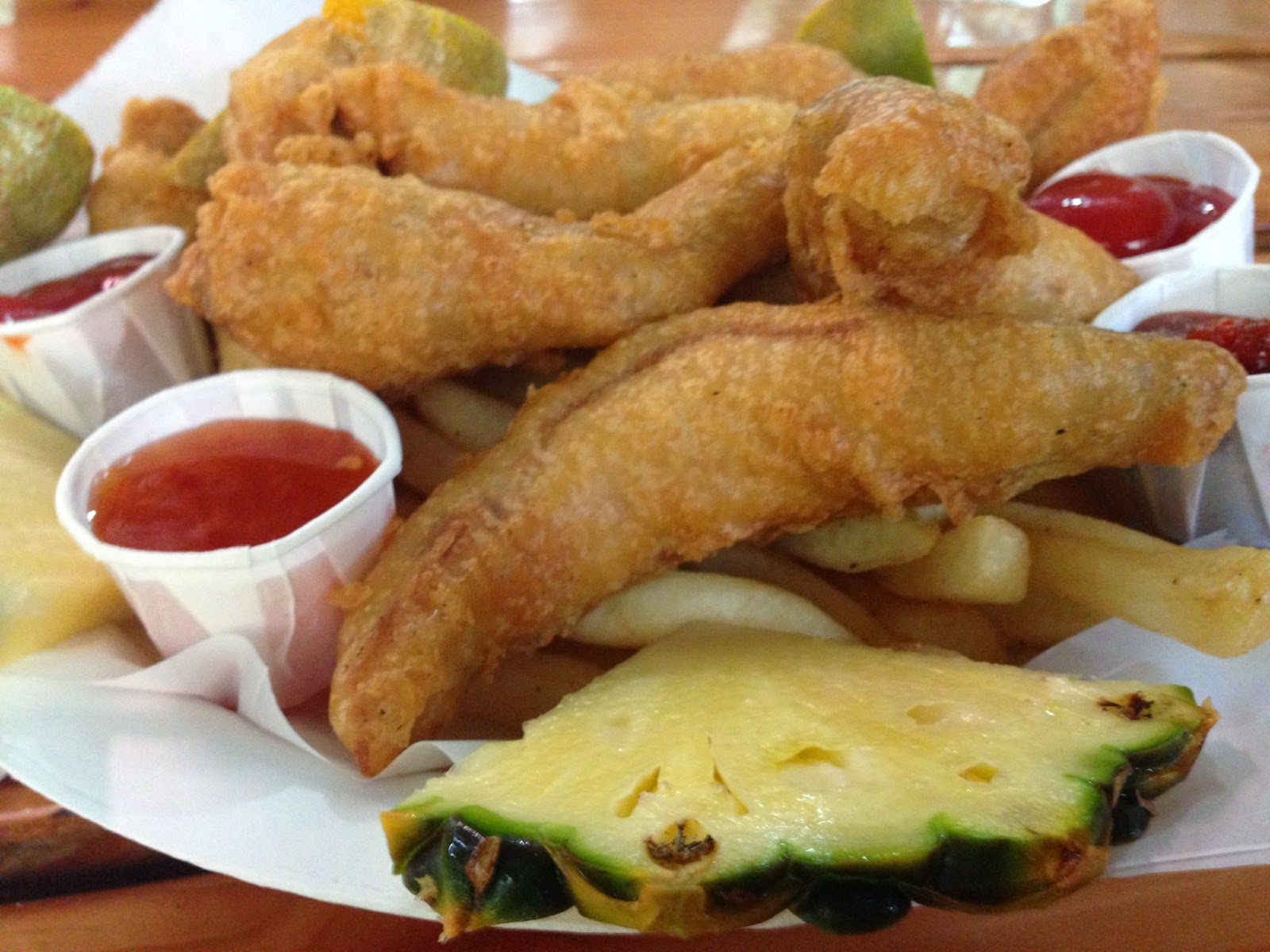 Hands down, the best meal we had was after our Road to Hana roadtrip in Maui. Somehow, although during the first half of our trip it seemed like there were thousands of cars with us, on the way back, we were the only car on the road. We were nervous this would mean the food stalls where we aimed to eat dinner would be closed. Of course, we had also forgotten to eat lunch that day so we were extra ravenous. But we rolled up to the stalls and there were still diners eating fish and chips at a food truck called Island Chef. We were too hungry for tough decisions so we ordered fish and chips as well. The chef in the van held up a huge tuna and said, "how about *this* fish?" and I knew we had made the right choice. The fish was caught by a local boy earlier that day and was freaking amazing once fried and served with some equally amazing fries. 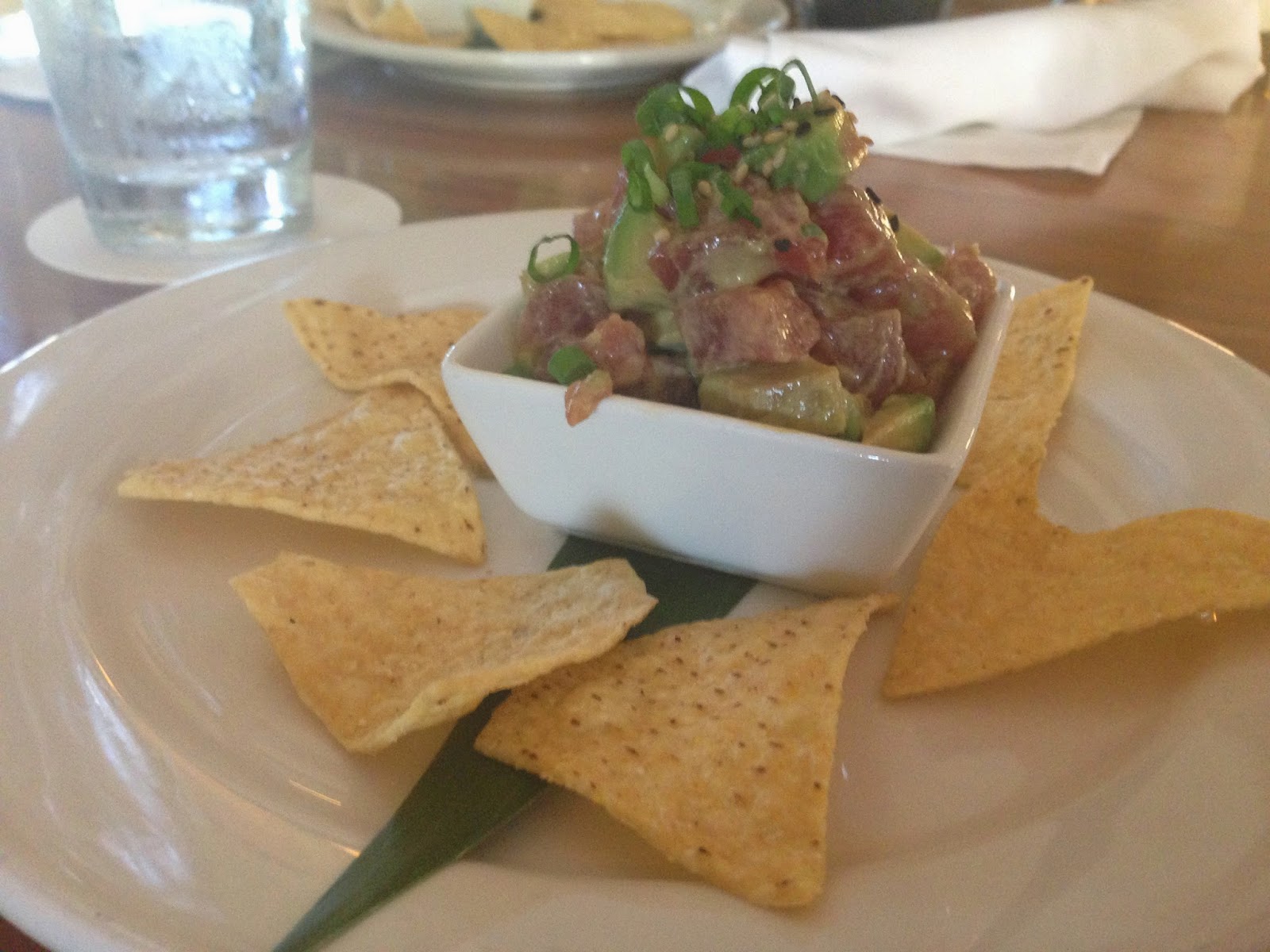 Speaking of tuna, I'm pretty sure I got mercury poisoning while I was away because I ate tuna at least once a day. Our first taste of the Hawaiian classic dish Poke was at Happy Hour with Meg and Kevin, two of my friends from Hoboken who happened to be in Kauai on our first full day. We went to an old plantation near our hotels called Gaylord's for yummy cocktails and $5 appetizers. Poke is raw tuna and typically avocado served with chips (which was very similar to the tuna tartare I had at Ainsworth Park recently). After our first taste of Hawaii's raw tuna, we couldn't get enough. We had it in wraps and tacos at Mermaid Cafe, tuna two ways at the Beach House, and in a wrap that multiple friends told us they dream about to this day at Kilauea Fish Market. I think my favorite was that first taste of it at Gaylord's, although they were super stingy with the chips. 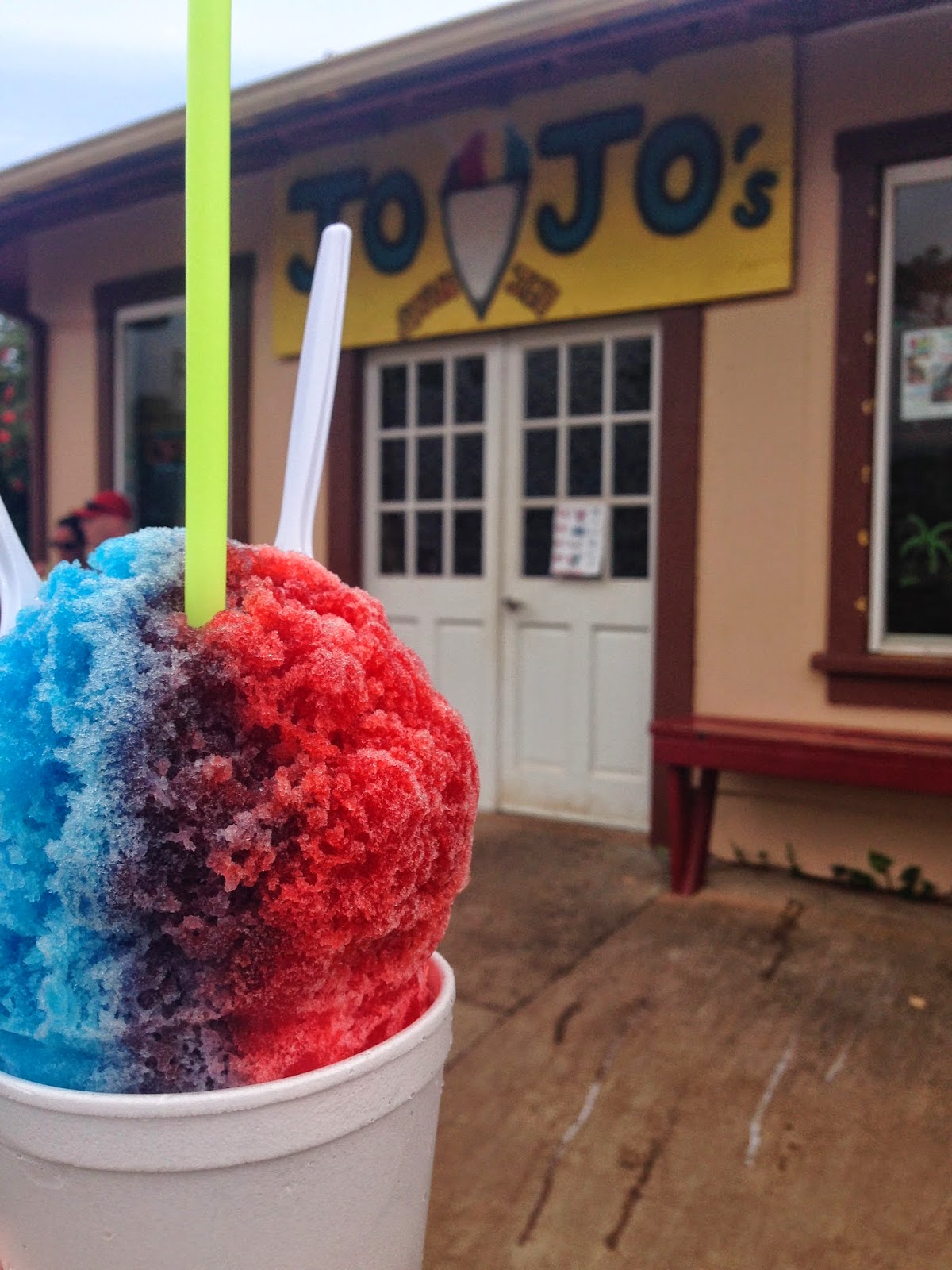 Shaved Ice is a sweet staple on the islands of Hawaii. It's often compared to the snowcone, but is far from it in texture. We ate shaved ice a few times on our trip, but the first was at Jo Jo's in Kauai. For some reason, the line was ridiculously long when we got in and I apologized to Katie several times for making her wait in it, but it was worth it. There were about 60 flavor options but my guidebook suggested "rainbow" for the first time. They usually put a scoop or two of macadamia nut ice cream on the bottom, but had run out so we had some vanilla ice cream on the bottom of ours. It was sweet, refreshing, and lasted the whole car ride back to the hotel and some time sitting by the pool as well. What's pictured above is a small - the large is double the size and probably would have lasted until bedtime. 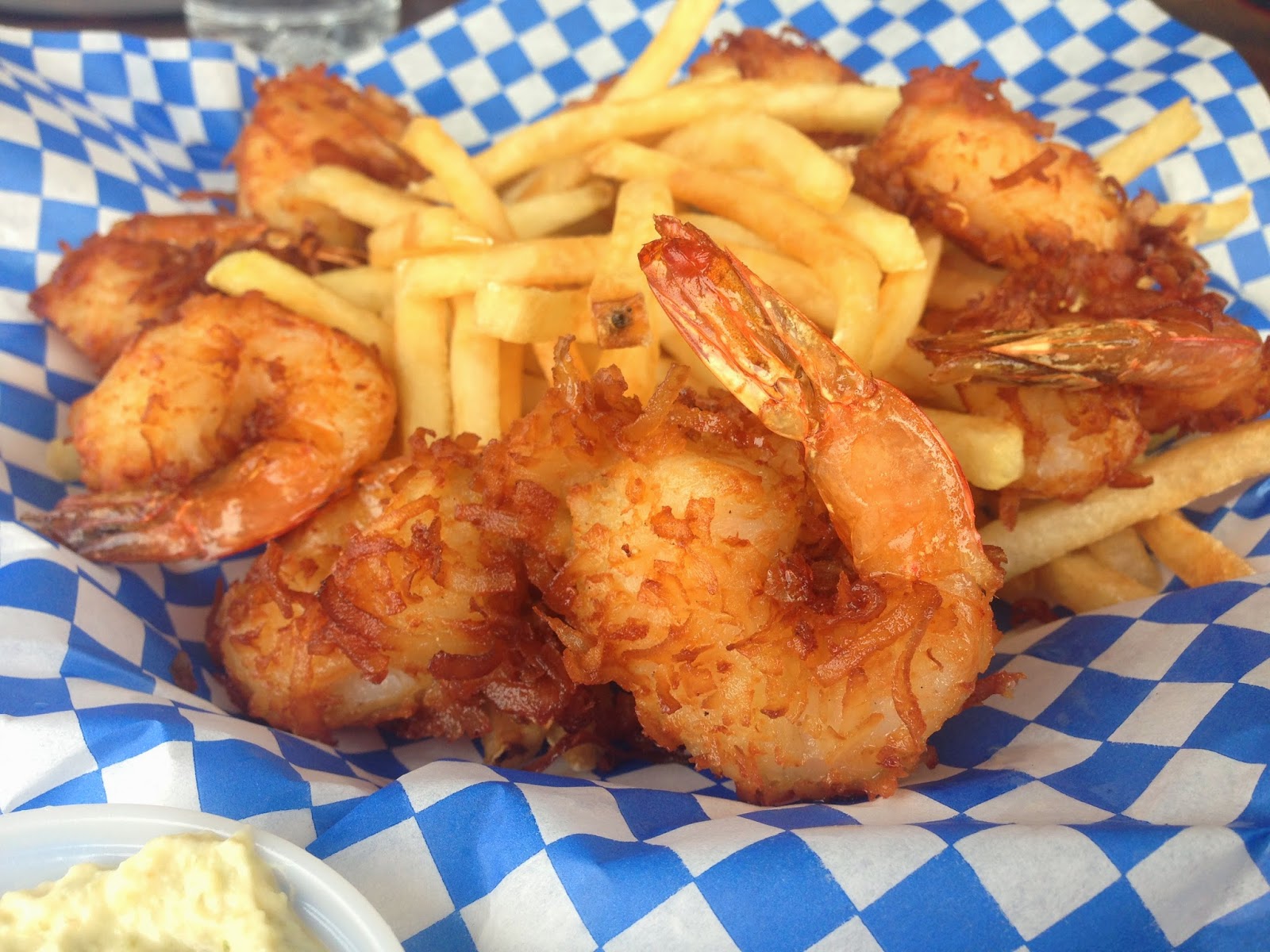 On our first morning, my pancakes were served with coconut syrup and I became obsessed. The waitress suggested I put it in my coffee as well and my life was changed. I had to ask Katie to force me to get something else for breakfast after my first three mornings because I knew I needed some variety, but then I ordered coconut pancakes still another time. But as good as the coconut pancakes and coffee were, I'd say my *favorite* coconut meal was the above shrimp at a Shrimp Station in Kauai. 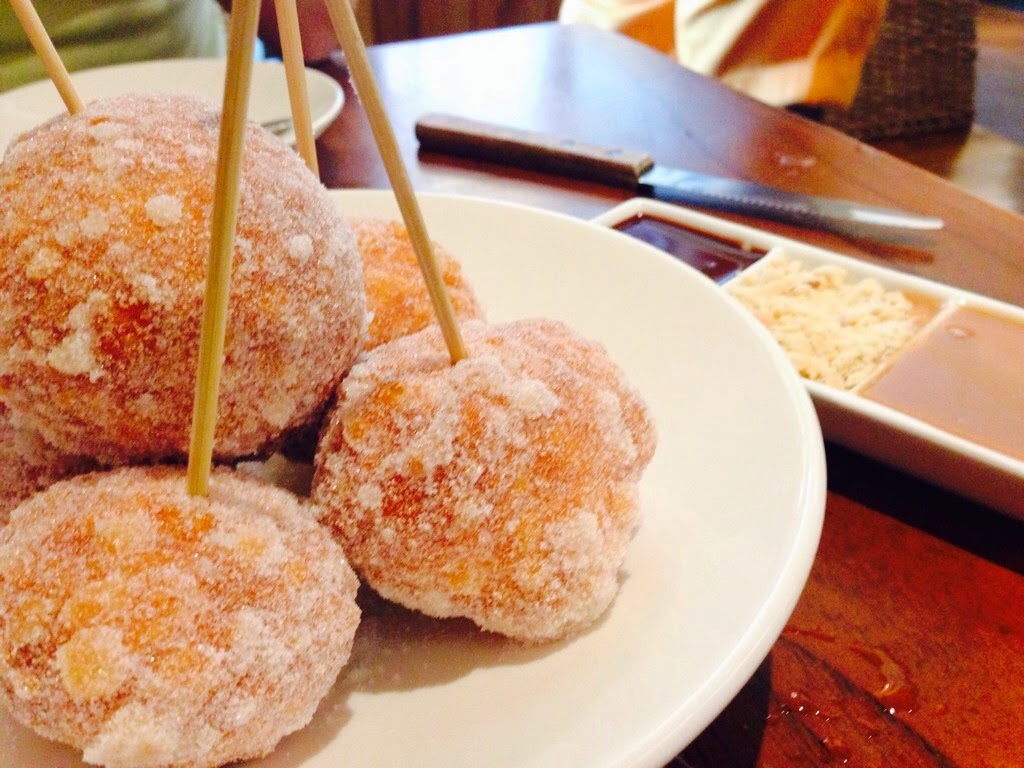 Malasadas are fried dough balls from Portugal that you can find all over Hawaii. Pictured above are some we devoured at Star Noodle in Maui, after one of our only non-seafood meals of the trip. We drizzled them in chocolate, peanuts, and butterscotch and were glad we didn't have to share with more than just each other. 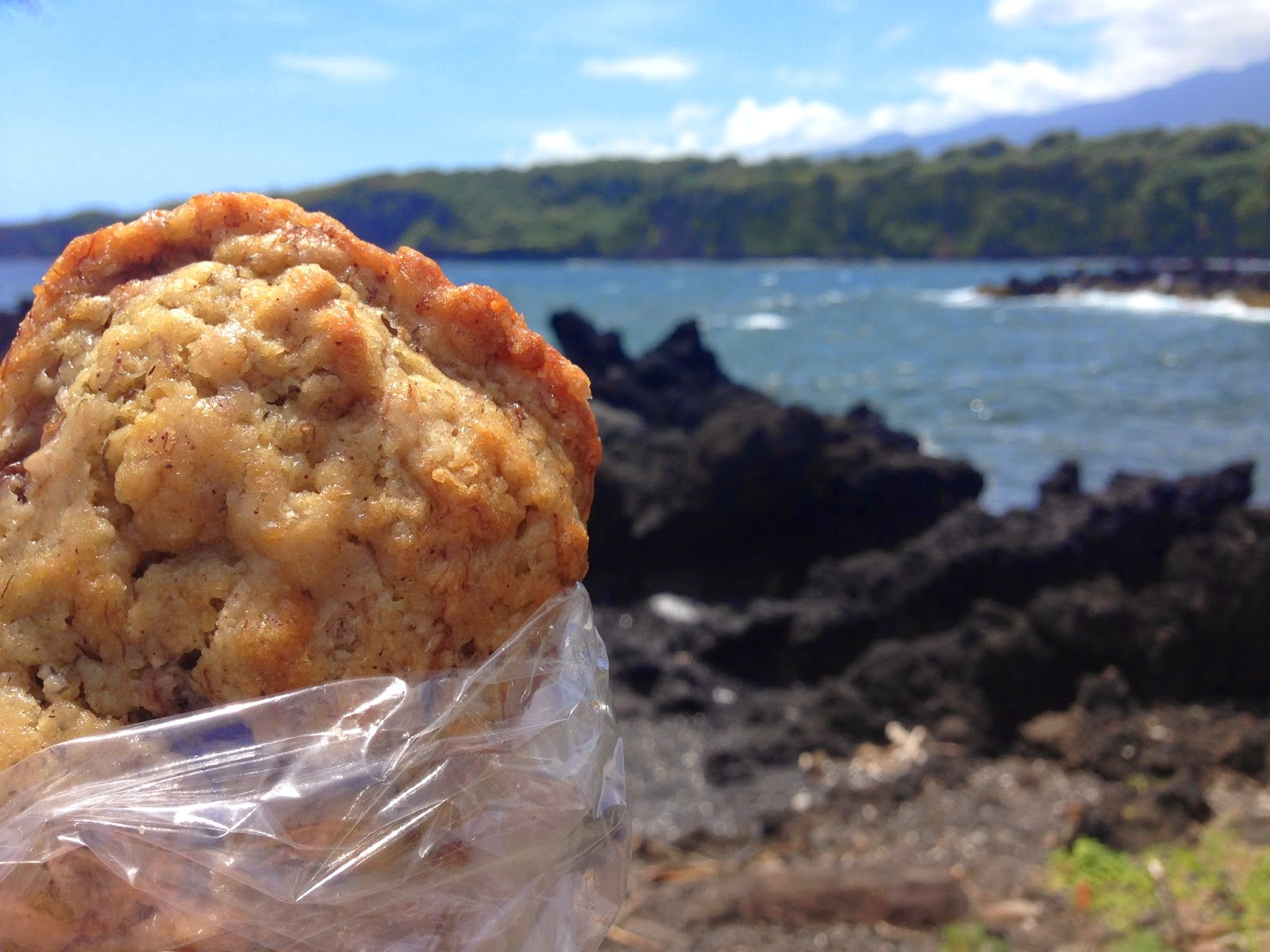 It was recommended by a friend of mine that we stop for banana bread before making the long trek along the Road to Hana. At a surfing beach, Ho'Okipa, right before the road trip traditionally begins, I spied a bakery truck with a banana bread sign out front and got excited, thinking that this had to be *the* banana bread we *had* to buy. It was absolutely delicious and made it with us to several more beaches. But, along the way, we also saw several other options for banana bread so it's quite possible that there were even better banana breads out there. 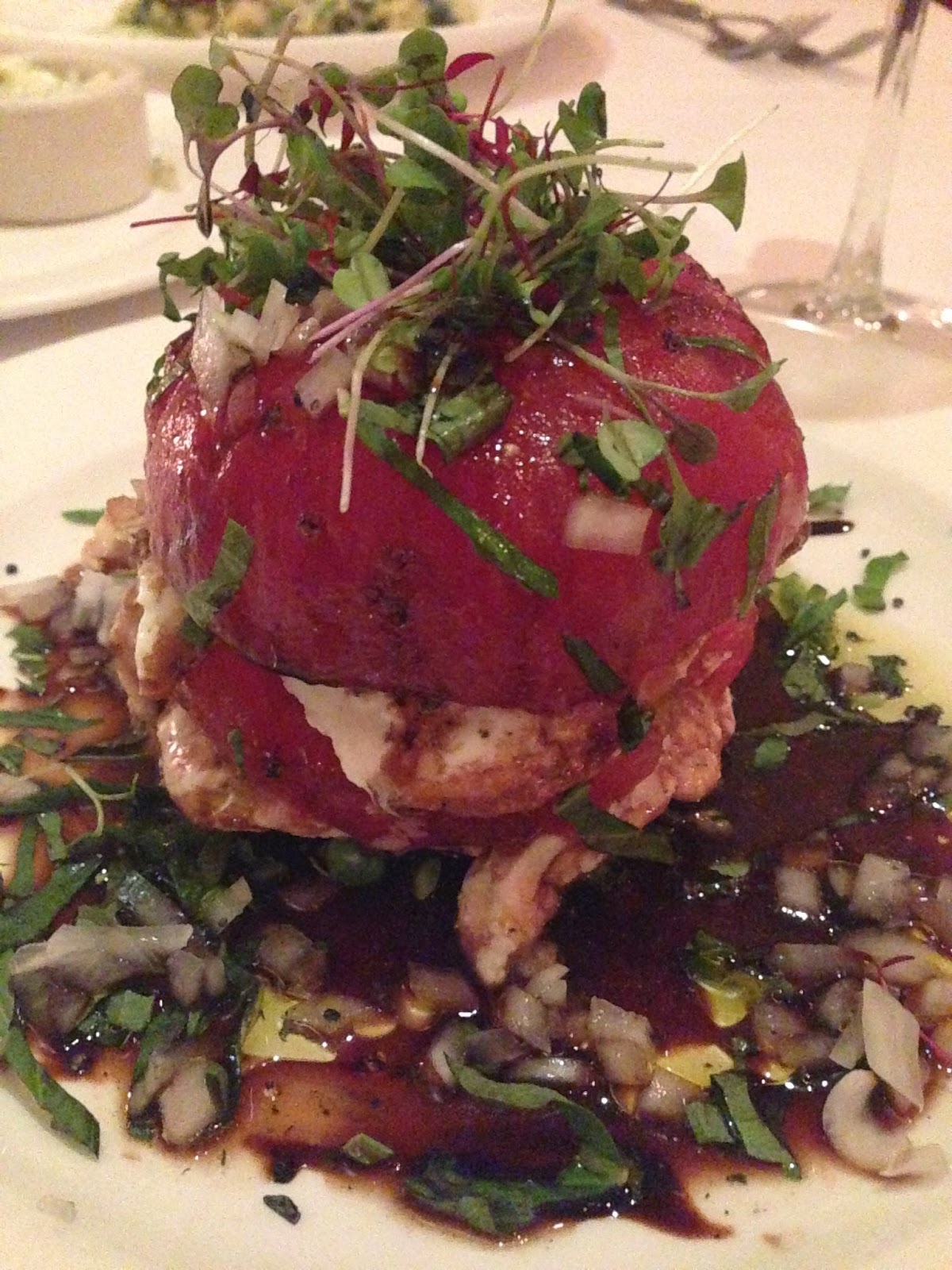 Lahaina Grill was our biggest splurge of the trip one night in Maui. We had basically been eating at food stalls and trucks but decided to wear dresses and skip our daily Seth Rogan movie one night. I had reservations about if I'd be able to eat enough of a $50 meal to make it worth it, since we weren't able to do anything with leftovers. I went with the $24 Bufala Tomato Salad instead, mostly because buffalo mozzarella is to die for and there was truffle oil involved. The waitress said it was her "favorite salad on the menu...no, the world" so I expected a lot. And a lot I got. I certainly don't eat enough salads to have a favorite salad in the world, but this one could easily take the cake if I had one.