Chasing Down Some Cheap Eats

Sometimes I have an obsessive personality. In 7th grade, it was Beanie Babies. In 9th grade, it was 'N Sync. So far this month, it has been the New York Magazine Cheap Eats issue. I'm talking OBSESSED. As in, I may have made my own spreadsheet with categories of Borough, 'Hood, Cuisine, and what the magazine suggested to order there. If you are nice to me, maybe I will share, if you then promise to go to one (or several) of the establishments with me.

The Cheap Eats issue is nothing new, but this year NY Mag did something a little different. They ranked the 101 Cheap Eats selections for the first time in 8 years but also only included restaurants that had opened since the last ranking. Here is a sampling of a few I'd tried prior to this but also some I just *had* to try this week. 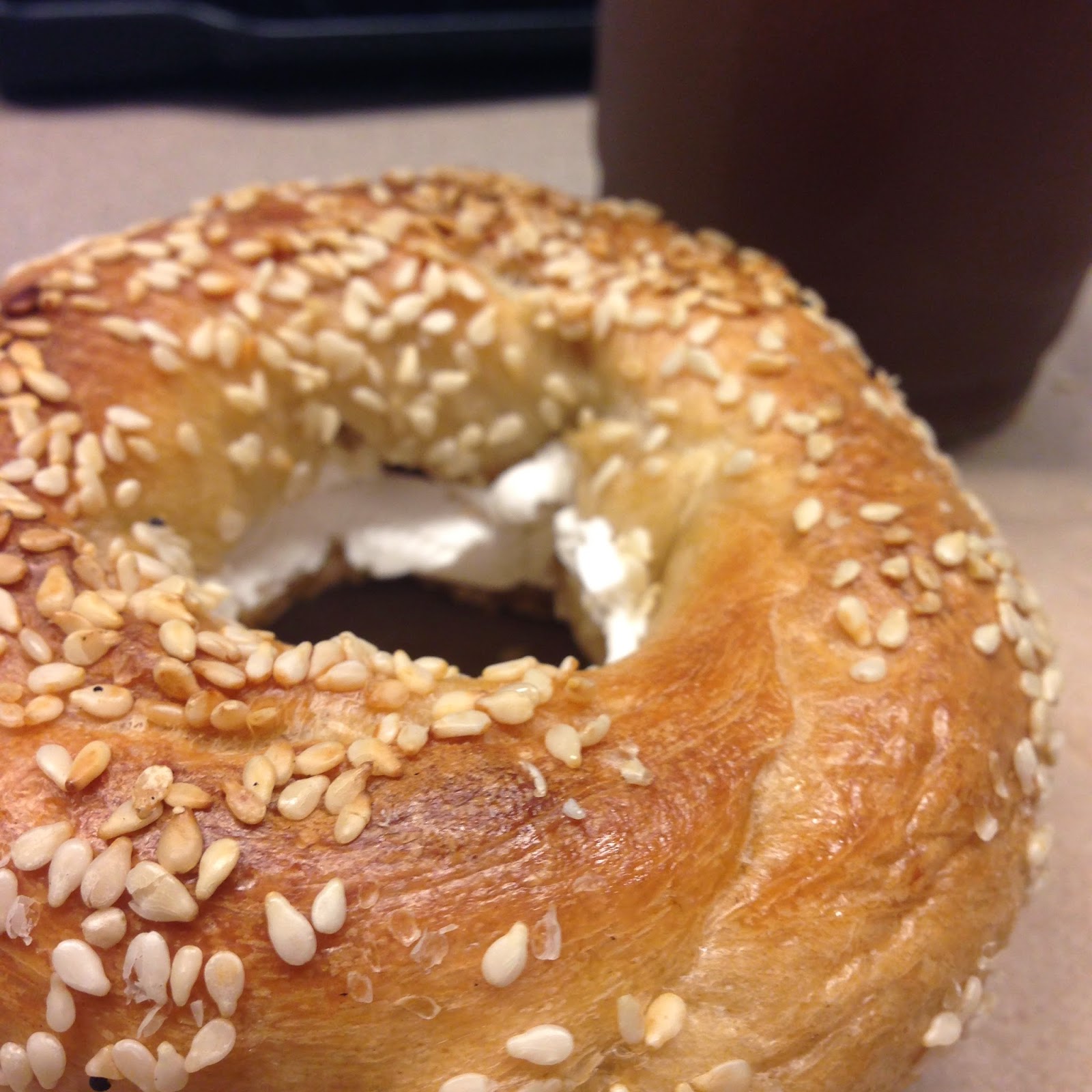 I happened to share my obsession with the Cheap Eats list with the right person at work. He lives near Black Seed Bagels and brought them in on Friday. Friday mornings are usually difficult for me, but this Montreal-style bagel made this one a lot easier. Montreal bagels are smaller, larger-holed, and way more dense than New York bagels so they may not be for everyone, but I enjoyed the surprise for sure.

Saturday's Smorgasburg treat was a sandwich from Porchetta. Considering how long the lines were at some stalls, I was surprised when I walked right up with no wait, but maybe not everyone in the city read this NY Mag with as much focus as I did. I first had a porchetta sandwich in Philly in the fall so I knew I'd like this one. While it was good and just what I needed right then and there, I couldn't help but wonder if the storefront had something better to offer that made the NY Mag editors think this belonged in the top 10. I felt like it was missing something, like sauce or cheese. 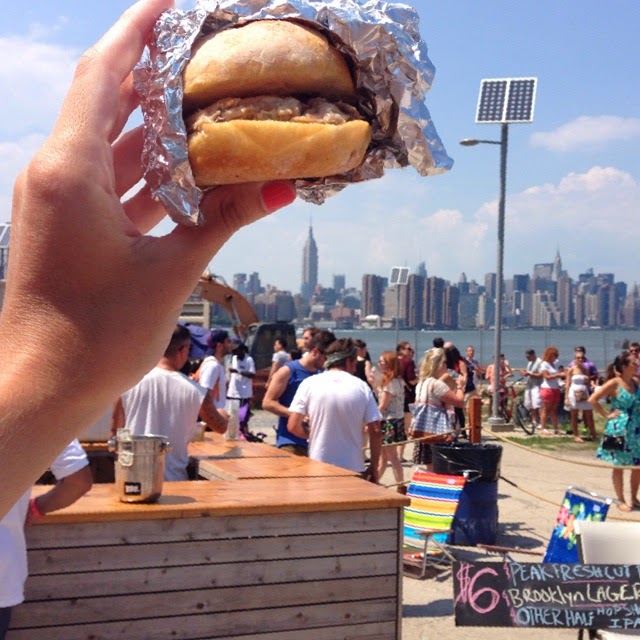 Caitlin took me to Parm sometime last year. At this moment I can't remember if I ordered a chicken parm or a meatball parm but I do remember enjoying it a ton. Since I can't remember which sandwich I got, I think this place is worth a revisit. No Parm, no foul. 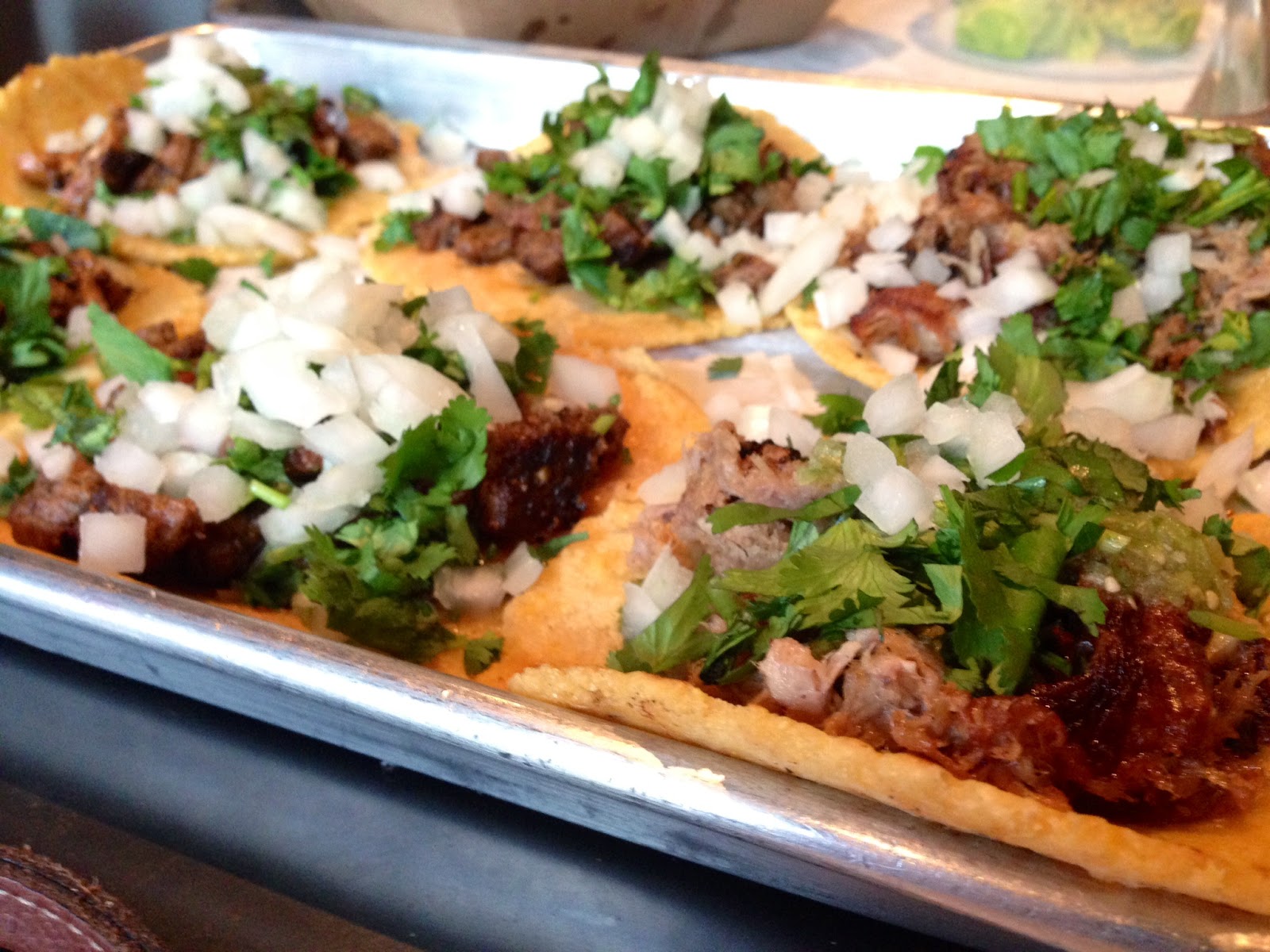 I've been wanting to try Otto's Tacos since it opened so when Kat asked me on an impromptu date Tuesday evening, I pushed for this place. Talk about Cheap Eats. Tacos are only $3 and while tiny, you probably only need 2 or 3. My favorite was the Carnitas taco, but the Carne Asada and Chicken were both worth trying as well. We also opted to share a Gorgon, which NY Mag recommended. It's not on the menu so we felt VIP knowing about it, but felt a little too full after our tacos that we just sampled a little of the huge deep-fried packed-to-the-brim carne asada, serrano-chile crema, guac, onions, & cilantro taco ($8). Go either Gorgon or tacos, but not both. 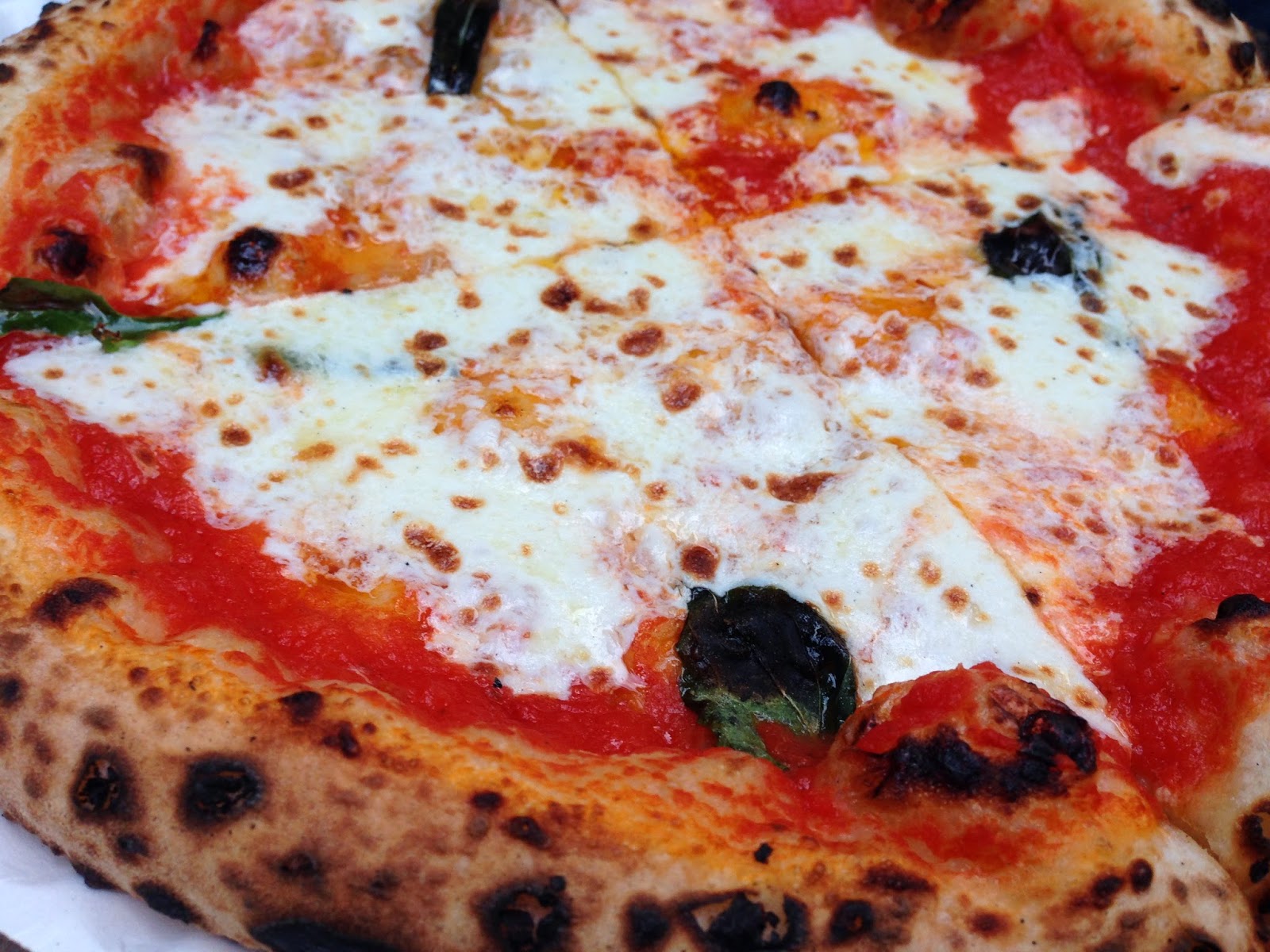 Aubrey and I got our first taste of this Brooklyn hot-spot at Madison Square Eats in May, where Roberta's had set up shop in a food stall for the month. I'd heard that it was hard to get into the storefront, but there wasn't a line that day. Or, so we thought. I asked someone where the line was and he said "I think this is it" so I shrugged to Aubrey and we stood behind him. After we got our pizza, we realized that the line actually had been about 30 deep, but no one waiting had noticed when we stepped in right at the front. We split a delicious Margherita pizza across the street in Madison Square Park after getting kicked off the grass and then realizing we'd had our beers with us that weren't supposed to leave the roped-in area. Oops.

I've had Mighty Quinn's a few times in my years in New York. Just recently, I've visited the location in World Financial Center, another awesome food vendor oasis downtown. Kristyn and I met for lunch and enjoyed some amazing brisket sandwiches, gossiped a lot, and talked about Full House, as we are wont to do. 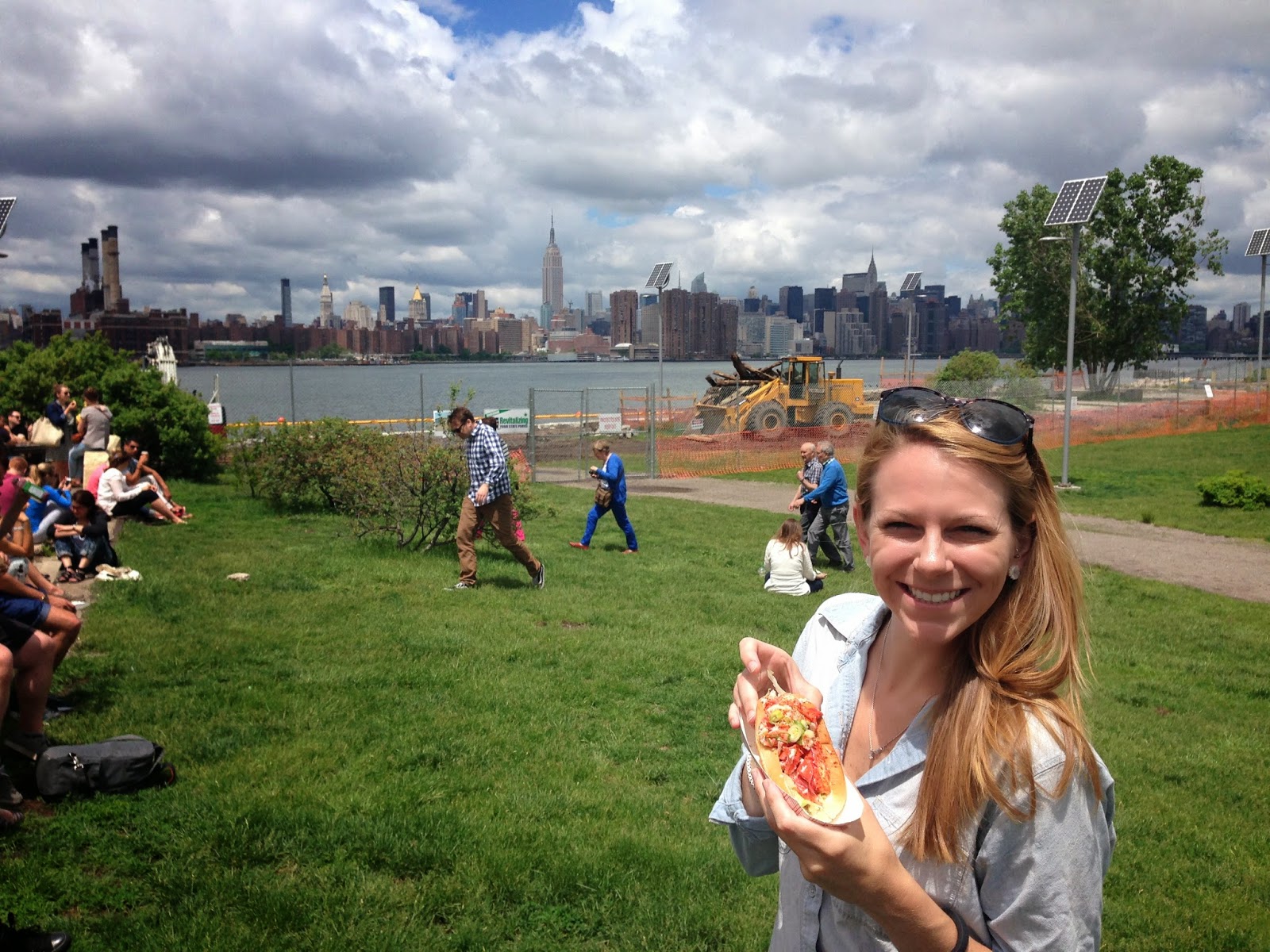 Red Hook Lobster Pound is another food vendor I keep returning to because, duh, Lobster. Their lobster rolls are obviously on the more expensive side of Cheap Eats sandwiches at $16 but oh my goodness, are they satisfying. Amazing meat. Amazing butter-slathered bun. Sometimes with bacon. The above picture is from a Smorgasburg trip earlier this summer.

I don't eat vegetables on a regular basis. I just can't do that to my tastebuds. But DC's favorite salad place, Sweetgreen, just opened up right near my work building and I've been eating so much healthier this season because I actually *love* these salads. My favorites are the Santorini (shrimp, feta, grapes, chickpeas, romaine), the Kale Caesar (kale, romaine, chicken, shaved parmesan, the best parmesan crisps you will ever taste, tomatoes), and the Guacamole Greens (I get romaine instead of the mesclun, with chicken, tons of avocado, tomatoes, onions, tortilla chips).

After George's birthday celebration on Saturday night, I couldn't help but sneak into the new Sticky's in Murray Hill that was on my way home. I brought home three large "buffalo balsamic maple" chicken fingers with shaved carrots and blue cheese crumbles on top. A glass of milk was necessary for me as they had more spice than I expected, but I was happy even so. Sticky's is open until 3 am so I see many late-night purchases of chicken fingers in my future. Next time I'll try their pretzels & salted caramel flavor. 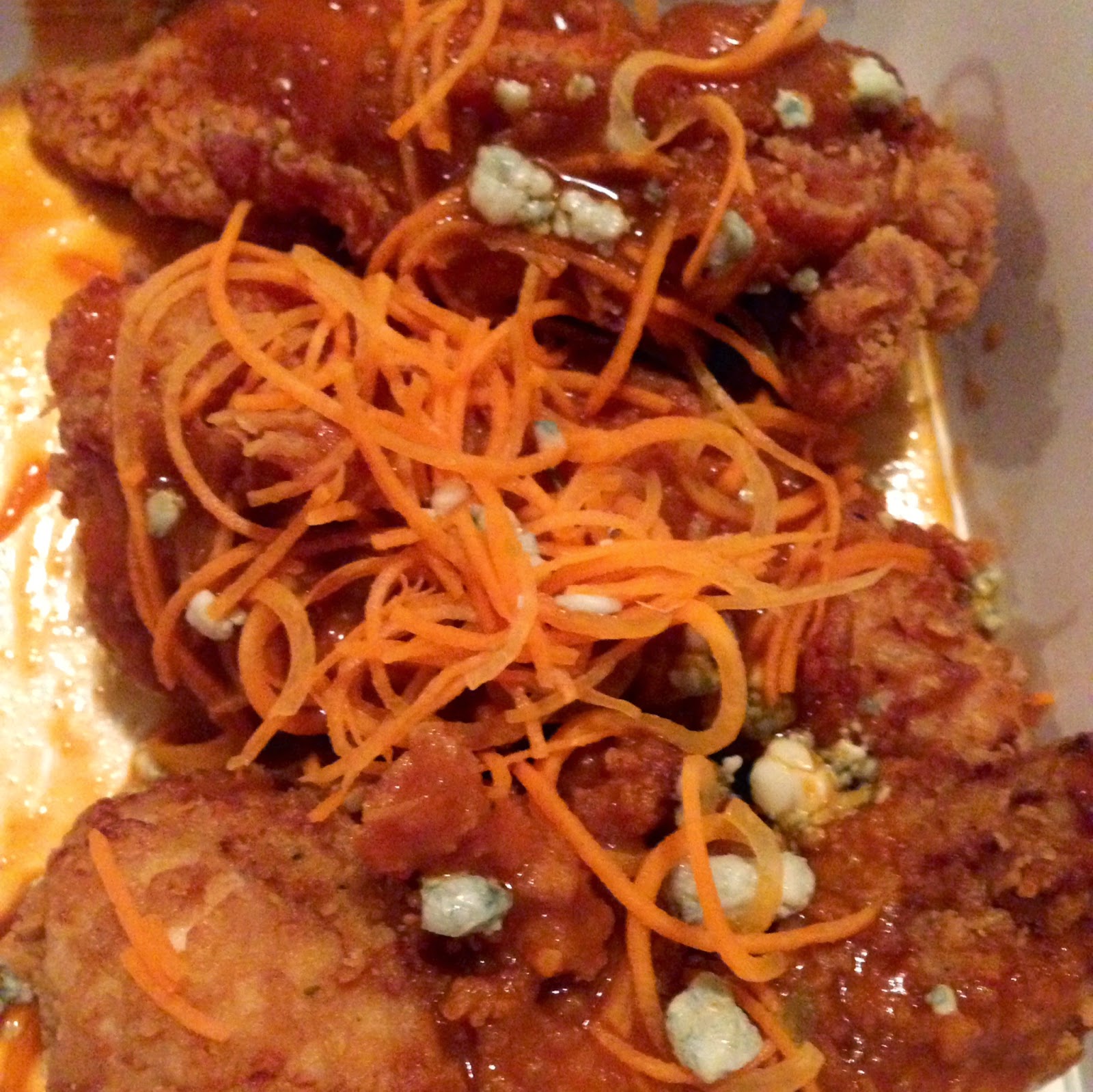 The thing to get at Artichoke's is obviously a slice of pizza with artichoke-spinach dip on top but just get one and split it with a friend. A whole slice will do you in for the rest of the night.

So who wants to visit the other 91 with me?