What You Get For Waking Up in Montreal

Sometimes when I travel, I book a hotel deal in which breakfast is included. This usually works out well and I feel fueled for the day ahead and hit the ground running, but it is not the way I wanted to roll on our recent family jaunt to Montreal. As per usual, I received plenty of food recommendations from friends before heading to the Great White North. I quickly noticed a pattern from my list of suggestions - that the breakfast foods in Montreal were going to kick booty and I wanted in on all of it.

Here are my picks for Montreal Mornings: 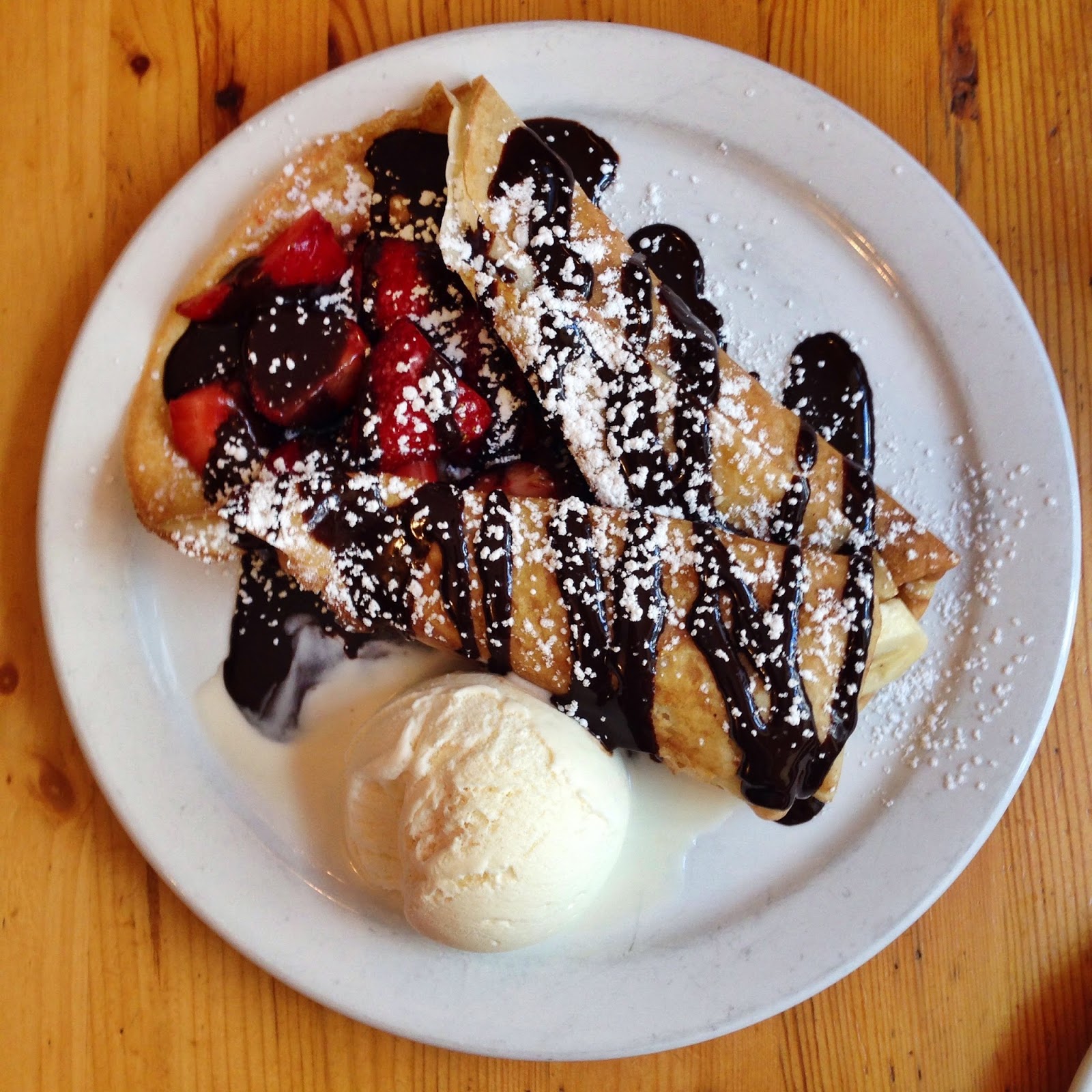 Montreal has an intense French influence so obviously I was excited about the crepes. The World Wanderer recommended this particular creperie in Old Montreal, and it did not disappoint.

Créperie Chez Suzette does not open until 11 so on a normal weekend day, this would be perfect for breakfast. Since we only had a few days in town and were up and at it early, we stopped in for a late lunch instead, at 2:50. A sign outside and our waitress informed us that all crepes ordered before 3:00 would be half off so we spent the next ten minutes panicking about what to choose from the extensive menu. "We don't have time to order drinks! Worry about that later!"

Miraculously, we were able to order three half-priced crepes given our limited time to decide. We ordered two meals and one dessert to share. I would say that we split them all evenly, but I'm pretty sure my dad was spooning all of the excess sauces off the plates.

We stuffed our faces with: 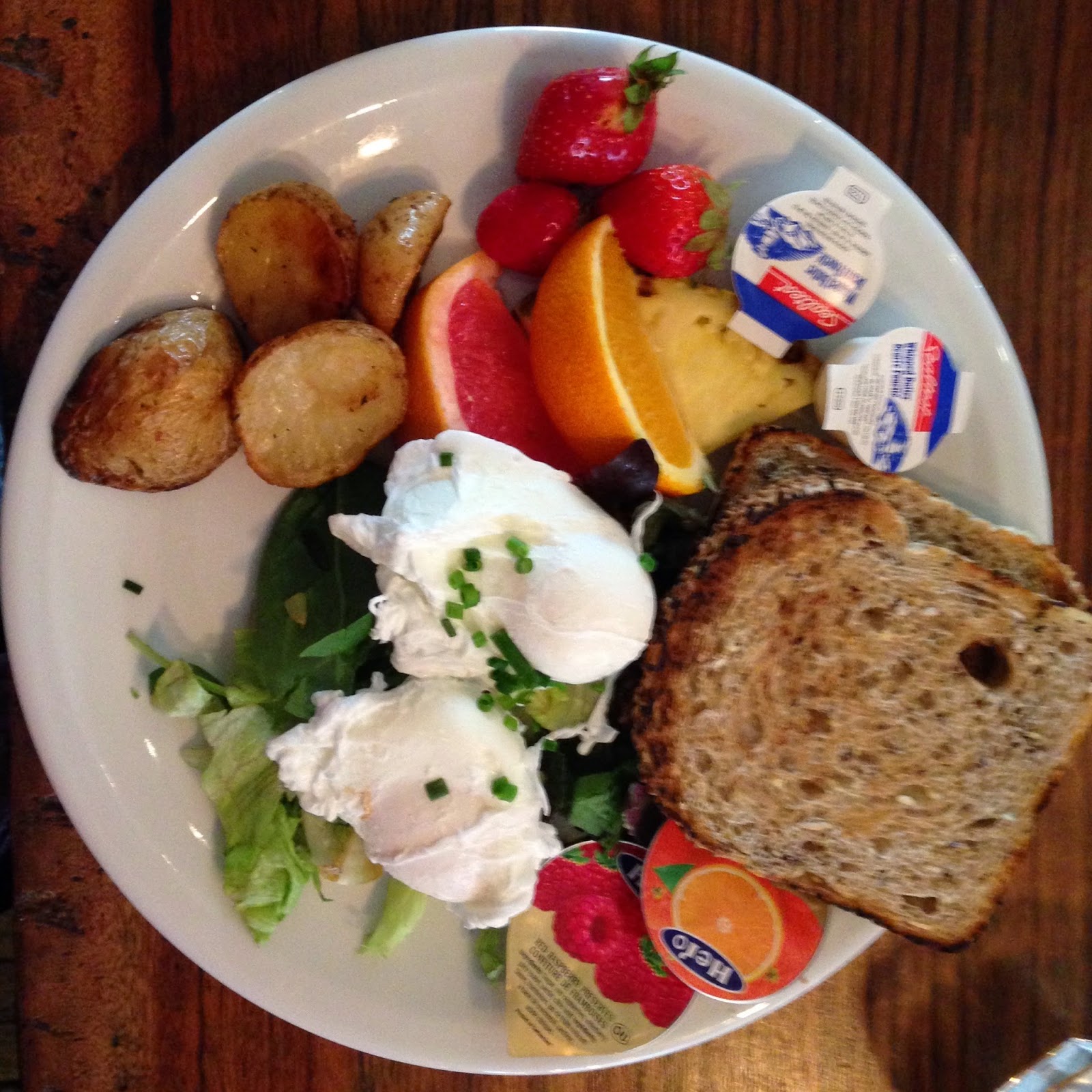 Le Cartet is an adorable spot in Old Montreal for a yummy sit-down breakfast. I love a breakfast with many different tastes and that is exactly what I got. I ordered the poached eggs, which, in my experience, many places mess up, usually because the whites are a little too runny. These poached eggs were the most perfect I'd ever had. I also loved all the sides - the country bread toast, potatoes, grapefruit, orange, pineapple, and strawberries. I obviously didn't eat the greens because I am who I am.

When we sat down, I had noticed that the magnets on the wall spelling out the name of the restaurant said "El Cartet." I thought for a second we'd ended up coming to the wrong place and that this wasn't where my coworker had recommended, but at some point during the meal, one of the servers went up to the wall and fixed it.

I am pretty obsessed with the artwork that was on the wall I was looking at the whole meal instead of paying attention to my family. James Kennedy {link to artwork here} does some pretty amazing pieces with the shapes of individual continents carved out of a dark metal background. If anyone is looking for expensive Christmas gifts for me, this is the way to go. 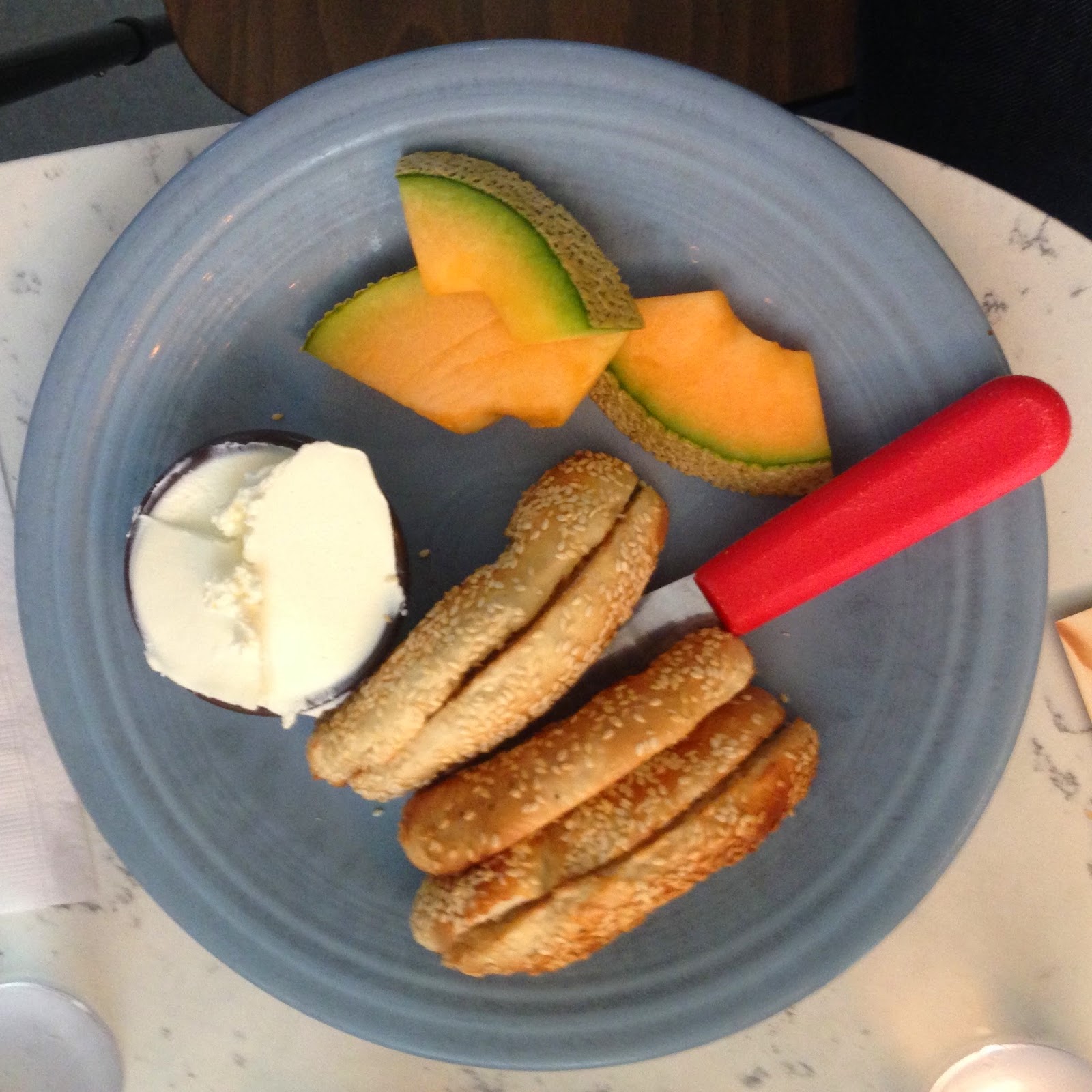 I'm clearly a huge fan of New York bagels {read my latest love letter here} so of course I had to see what the deal was with Montreal bagels. I'd read that some (gasp!) think that Montreal bagels are better than those in NYC! I'd tried a Montreal-style bagel from Black Seed Bagels this summer, but I still had to try a real-life one while I was there. It is said that there are two choices for Montreal bagels and they've been battling for decades - St-Viateur's or Fairmount's. Most of what I'd read stated that in recent years, St-Viateur's has won this race, so it was to there I dragged my family.

Although Montreal bagels are indeed smaller than New York's, I was delighted when instead of just one bagel, I actually received a bagel and a fourth on my plate, which also led me to believe that someone in the kitchen had a nice snack of the rest of that bagel.

The bagels are indeed delicious but are more similar in looks than tastes to New York bagels. They are denser and chewier and if I hadn't known what I was eating, I may not have guessed it by taste alone. While the bagel was quality, I did misstep by ordering low-fat cream cheese because it tasted more like sour cream than the low-fat stuff I am used to. I ended up stealing some of Katie's chive full-fat cream cheese and continued on my way.

When we finished our breakfasts, we ordered a few bagels to go and enjoyed them later in the day. My dad and I got cinnamon & raisin, my mom had a poppy, and my sister won this round with her rosemary & sea salt bagel. Next time I am in Montreal, I am ordering the rosemary & sea salt by the dozen. With full-fat cream cheese and lots of it.