My Struggle with Port Wine

Since I've turned 30, I've acquired a taste for red wine - but I've only been 30 for three and a half months. During my first 9 years (okay, 12) of drinking, I tried many reds and whites, but only ever loved one: a Malbec in Buenos Aires which led me to try walking eleven dogs at once, as the dogwalkers in BA do. I blamed my distaste for wine on my "oversensitive sour taste buds" which also made me deny Sour Patch Kids and lemonade, unless diluted with tons of water.

When my sister, Katie, and I went to Porto, Portugal in March (while I was still 29), I knew I was going to have to suck it up and try port wine because that's what you do in Porto. You travel across the river to the town of Vila Nova de Gaia and have a tasting at one or more of the 17 port wine manufacturers located there. We'd been on the river by boat the day before so we chose to walk across one of the seven bridges that morning.

The manufacturers in Gaia are all within a few blocks of each other but we still had quite the journey to get to the one we were told to try - Ferreira Cellars. We may very well have gone the wrong way, but we found ourselves on the steepest decline of steps and pathways we encountered in all of Iberia. This is saying a lot because Lisbon is basically San Francisco in this regard. We joked that we could have just taken the gondola down but acknowledged that both of us would have been too nervous because we are our mother's daughters, after all. 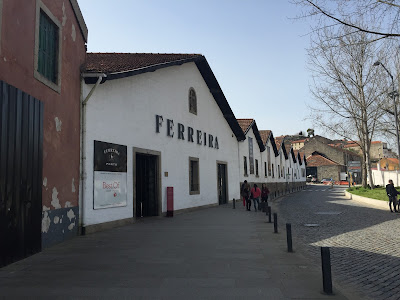 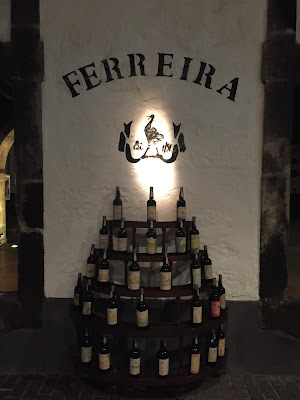 Ferreira was founded in 1751 by Dona Antonia Adelaide Ferreira who became the richest woman in Portugal. We were told that Ferreira was the most Portuguese and the most authentic of all the manufacturers in Gaia. In case you are unfamiliar, port wine is typically a sweet dessert wine. It has to have been made in the Duoro Valley in Portugal in order to be called port. Port-like wines are produced elsewhere globally (Australia, France, Argentina) but the European Union forbids them from being dubbed as port.

We ordered both a white and a red tasting - white, because we thought I'd be better able to handle it and red, because that was more traditionally what port was all about. The white tasting was on the menu as "Smoothness" and the red was "Intensity". 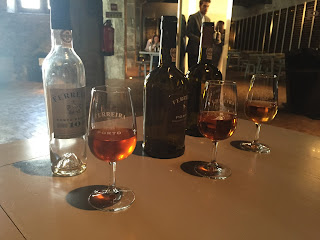 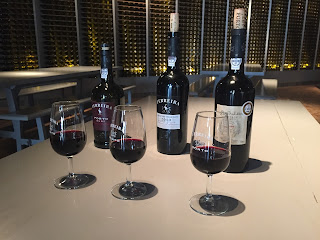 I determined that I liked a honey wine best out of the whites we were given. But even with some favorites, I noted that I would "never ever ever ever" order port. I have never made more sour faces in my life. Katie and I started out trying to analyze the wines and figure out what they tasted like and how old we were when they were made, but this became more difficult the longer we drank. 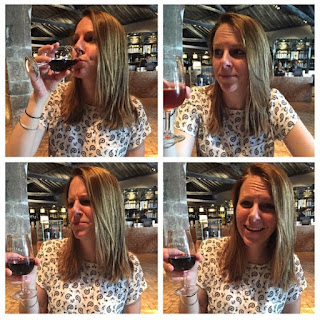 When we got to the reds I said, "I don't want to do this. This is like torture" - but I ended up liking one of the reds too. Well, no. I don't want to say that I liked it. I want to say that it was "fine" and that my face didn't turn into a sour Skittles commercial immediately. I did find, the more we drank, the easier the port was to drink and the second sip of each wine was much better - well, more tolerable - than the first.

Friends who know more about port than I do saw my pictures of the tasting and decided that the reason we didn't love it like we should have is because each tasting was basically a regular sized glass of wine and it should have all been much smaller. Katie and I probably should have split our tasting with six or seven more people in order to get the correct serving size.

Needless to say, after drinking WAY more port wine than anyone needs in one sitting, we were not going to make it back up the sharp incline without hurting ourselves. Katie referred to the climb back as "the biggest hill in the whole world" so I said, "if that gondola is less than 10 euros, we are taking it back up". I don't remember the price but we ended up in our own private gondola a minute later. We weren't nervous after all because of our port wine muscles. It was a short but fun trip and much better than the climb would have been at that point. We carefully walked back across the bridge and bid adieu to Gaia and port wine for the rest of the trip. 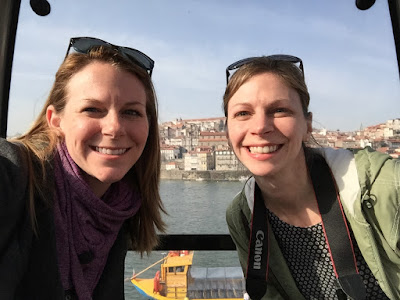 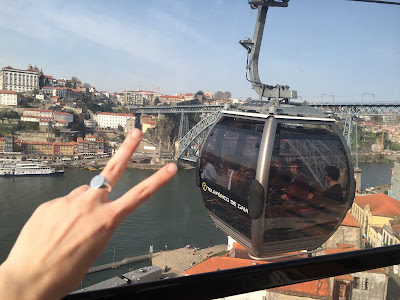 I do wonder what my 30-year-old self would think of port wine since my tastes for reds have changed in just a few months' time. This gives me yet another reason to return to Portugal. Hopefully sooner rather than later, in case my tastes change back.