"O god, that men should put an enemy in their mouths to steal away their brains.
That we should, with joy, pleasance, revel, and applause, transform ourselves into beasts!"
- Cassio, Othello by William Shakespeare


Shakespeare was no stranger to drinking. According to the interwebs, there are over 350 references to alcohol in his writings. One wonders, then, if he would approve of Drunk Shakespeare, the live show that I recently attended in Times Square, where cast members get wasted before the performance. If he's into organizing as much as I am, Shakespeare would have at least approved of the event space, decorated with as many books as Belle had in her library, but all grouped by color. 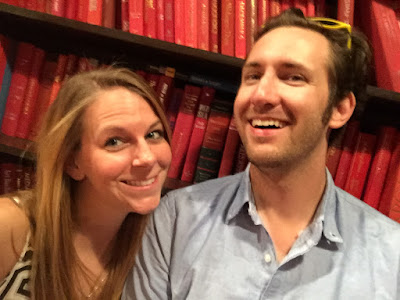 There was a VIP experience up for bid for the performance, which started at $15 and was won with $40. The highest bidder and a friend had the opportunity to sit in the throne on stage, becoming the King and Queen and therefore part of the show. They also received a bottle of champagne with cool horn goblets, fine chocolates, and hand massages (!). On another night, I might have thrown my name in the hat, but Ryan and I were seated on the floor right next to the throne and I felt like we were going to be part of the action already.

The cast introduced themselves and let us know we were going to be seeing a performance of Macbeth. Not having read Macbeth in school - let's be honest, who among us has read Shakespeare past Senior year - I thought it might be difficult for me to follow. I had forgotten, of course, that I was at Drunk Shakespeare and not Sleep No More, which I experienced a few years ago. We learned that our cast member who was going to get drunk was the woman playing Lady Macbeth, Monique. She was served five shots of Fireball Whisky, and although someone from the audience took one to confirm it was Fireball, I'd venture to say it might have been switched with something less alcoholic after the first shot. Lady Macbeth drank throughout the show as well, and those drinks seemed to be authentic.

The show started out normally, with the witches in the woods, but somewhere along the way, hilarious things began to happen. There was definitely some improv involved, but it seemed like some of the bits had been done before, and will be again, so I won't give away too much of the actual show. But please know that people were laughing the entire time. One of the things I'll give away is that Lady Macbeth demanded that one of the actors perform as different Muppet characters. There was also a dance battle and a hula hoop. Another hilarious (and disgusting) moment was when the cast took audience members' drinks to pour into a cup on stage for the potion. It was like the end of a game of Kings in college, but Macbeth actually drank it instead of everyone just staring at it. 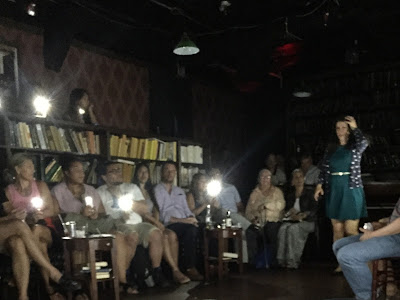 Sure enough, Ryan and I did become part of the show. The actor playing Macbeth asked us to kill Banquo and his son for him. Macbeth asked Ryan, "Did you kill Banquo?" and he answered affirmatively. I was then asked, "Did you kill Banquo's son?" and I also answered affirmatively. Macbeth then asked me, "Have you read the play?" to which I was forced to admit, "I have not..." and everyone laughed. Macbeth said, "Okay, you didn't kill Banquo's son," and asked me again, and I gave the right answer this time. I was a little embarrassed but was provided with a new beer for being put on blast so I felt good about that.


Even with the silliness, the show was as good as any representation of the play. These actors, though able to joke around, are no joke themselves. There were plenty of serious moments that made you forget for a second that Dr. Bunson Honeydew, the scientist from the Muppets, had just been on stage a minute prior. Lady Macbeth's famous monologue was especially poignant, considering how much the actress had imbibed.

In the end, I'd say Willy would approve of Drunk Shakespeare for sure, at least to the level that he approves other interpretations of his works like West Side Story, She's the Man, and 10 Things I Hate About You. I'd recommend looking on Groupon and other sites for discount tickets as there are many deals available. And you should know that you don't have to pay extra for the VIP treatment to get your picture on the throne, like the royalty you are: 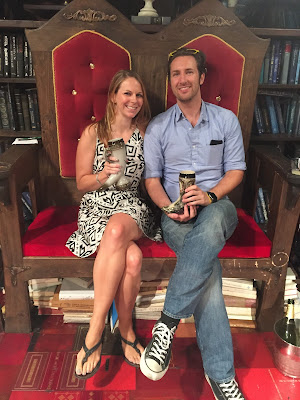